Sending data from Blueduino central role to another BLE device

Hello,
I want to connect BlueDuino Rev 2 with another BLE device connected to an Arduino.
The BlueDuino (firmware 2.1.5) is set to central role, while the other BLE device is set to peripheral.
It connects nicely (I can check from the other device’s leds), but I am not able to send any data through transparent UART from BlueDuino to other device.
It is working anyway in the opposite direction, i.e. if I’m sending data from the peripheral device to BlueDuino, it shows up correctly in the serial monitor of BlueDuino.

Both devices are connected to two different computers, with serial monitor on, and both arduinos are loaded with serial passthrough sketches.

Can you please help? I wonder if it’s a known bug of the firmware version, I can’t find any refernce for 2.1.5

What module is the another BLE device?

it is an HM-10 (genuine) connected to a cactus micro rev2
I am able to send data from iphone in central role to HM10 in peripheral using lightblue, back and forth 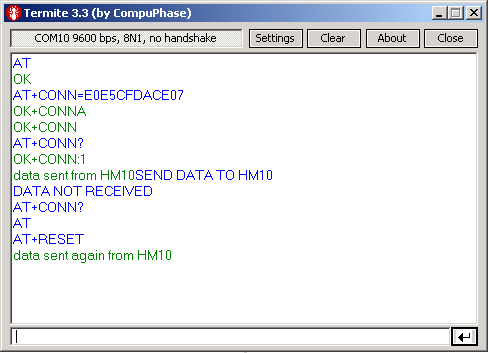 I’ve place an order for a HM10 module. Will test it soon

Let me know first the firmware version of HM10, mine is v540 but I could update if necessary, just to try the same

We just got the module today. the firmware version is v545.

Got the chanche to do some testing?
Matteo

hey there, still no news?

We’re a little busy these days. I do some simple test with HM10 module. It seems has a new self learning feature. I downloaded the user manual bluetooth40_en.zip and read the “HM-10_11 V542 Self-Learning Function Introduction”.

yes, but the case here is quite different
HM10 works as slave, and blueduino as central, so HM10 is not doing anything

one more issue: after upgrading to 2.2.3, I am not able anymore to talk to BLE module through arduino HWSerial1. The connection is good, because the sketch is the same as before when I was using 2.1.5, and it works with termite, but it is not working through ArduinoI didn’t notice befpre because it was hooked up with serial-TTL and I was using termite, but now I noticed that after updating to 2.2.3 it does not work anymore!

one more issue: after upgrading to 2.2.3, I am not able anymore to talk to BLE module through arduino HWSerial1.

so you’re telling me that there is no way to make the two units communicate?
and why HM10 is able instead to send data through transparent UART to blueduino?

Im making a blueduino project, the arduino UNO prototype work fine with hm 10 and app for android. Now im adapting the project to blueduino and i have some problems with de communication (i want to work with the blueduino in the same way and protocol with hm10s) to be 100% compatible. I´m learning about reprograming ibeacon with hm10 firm, the chip its the same cc2541but i don’t know exactly the way to do it. im working with arduino and mac.

Im following the topic,i will write if i have any news.
Thanks and comment!!

so you’re telling me that there is no way to make the two units communicate?
and why HM10 is able instead to send data through transparent UART to blueduino?

April, no news in this regards?

We need add some AT commands to change the UUID same with HM10. We have some on-going projects so will do it after weeks.

Please make this happen fast, I need this in a project that would release as soon as possible.